Ok I know I've imaged you to death - so now I think it's time to put together some words. I'm aware that blog "readers" aren't much for word-reading, so I've tried to sectionize my jibber jabber to make it as easy as possible. For those of you with total blog ADD, I've bolded the most important parts. Below is some data I collected while in the magical city of Buenos Aires.

FOOD/DRINK:
~ They don't drink their coffee iced, even in 95 degree summer heat. In an attempt to find a cold caffeinated refreshment (and be an obnoxious tourist), I patronized a Starbucks around the corner from the casa. When I ordered a grande iced coffee with a little bit of cream I received a 12 oz cup filled half way with cold coffee (no ice) and the rest of the way with whipped cream.
~ Kids drink Pepsi the way kids drink apple juice in the States...a lot.
~ Arugula is considered a pizza topping - as it should be.

STYLE/BEAUTY:
~ The guys have gloriously long hair and so do the girls...they all look like hair-flippers in dubbed Pantene commercials. I have short weird hair and did not fit in at all, and not in a cool way.
~ I'm pretty sure cellulite doesn't exist as a thing that people have - just like a standard cup of iced coffee with cream.
~ Girls and women of all ages are obsessed with hair removal, and many many conversations revolve around it. Shavers are shunned, waxing is the norm, and laser removal is optimal.
~ Their word for high heels is the same as the Mexican crunchy delights we all love: Tacos.
~ Everybody's style seems to be stuck about 5 years behind NYC's, with 2 exceptions: a few hot girls in their 20's are appropriately riding the 1990's wave, and pretty much all men over 65 who are totally killing the 1940's-style menswear game (I didn't take photos of either...I suck at approaching strangers for pics).
~ $25 is considered a lot for a big metal and leather necklace - needless to say I indulged.

CULTURE:
~ Anybody in any kind of "pop culture" circle knows all of the English lyrics to every popular song...ever...all of them.
~ People read while walking, and they're really good at it.
~ If Buenos Aires is the Paris of Latin America, and Berlin is the new Paris of Europe, is Buenos Aires the new Berlin? And if Berlin is what New York City was in the 70's, is Buenos Aires the old New York City? ...huh?
~ Folks in their teens and twenties have their own formed opinions about global politics...and they discuss them with fervor.
~ Their nickname game is insane...unsurpassed.
~ There's a very fine line - if any line at all - between a tortured Argentine/Parisian artist and an angsty teenage Nirvana fan.
~ Bookstores. Bookstores bookstores bookstores bookstores.

And I'll leave you with this, even though it has nothing to do with the rest of the post. I made my little teenage cousin pose like a blogger (with a little help from Ray Ban). If you read "outfit blogs" you've no doubt seen these poses time and time again: 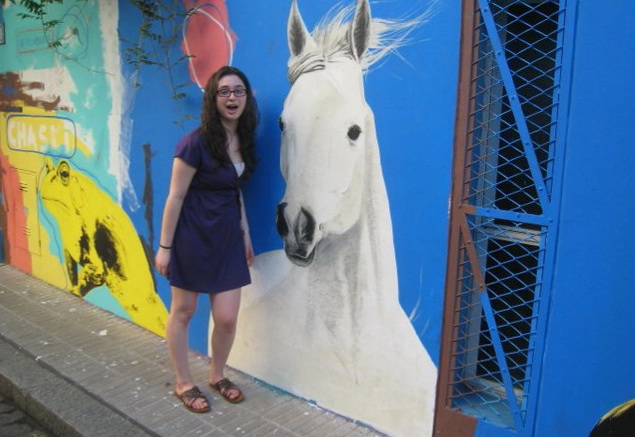 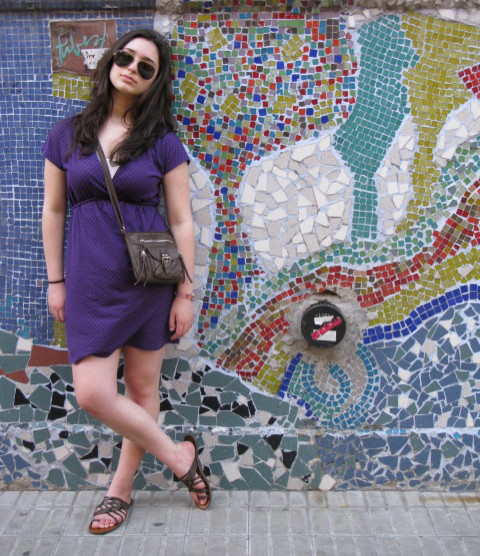 at 12:48 AM
Email ThisBlogThis!Share to TwitterShare to FacebookShare to Pinterest

HAHAH, very nice!! (Notice that also we Argentines don´t write "LOL". Personally, I´m against it and believe it should be persecuted and sent to Guantanamo. If it can´t be done legally, we should call the Mosad.)
I especially liked the hair removal observation, it´s a very healthy obsession I think. Listen, German women don´t shave and they created the Holocaust, so c´mon...
I hope my non-politically-correct-Argentine sense of humor is well received.
Best to all of you!
Daniel

OMG After reading this I realized I must be Argentinian! I have a cousin there - maybe I should pull a Mihal and go there.

P.S.: I love to read so thanks for the many, many words.