"Nothing Tastes As Good As Skinny Feels"

I love Kate Moss. This woman is constantly stirring the pot - and not in a Jon & Kate way or a Madonna in the 90's way - no, Moss causes a ruckus simply by being her and I applaud her for it. I have a few theories as to why she's a magnet for controversy. Firstly, she's super skinny. Anybody who is on the extreme of a relevant issue immediately attracts attention (both good and bad). The weight debate evokes so much sensitivity and political correctness in people (I met several of you in one of my previous posts), and Kate Moss is the perfect target for that upset energy. Secondly, this girl IS rock 'n' roll. She's a party girl who drinks (gasp!), dates rockers (double gasp!) and even does drugs (coughchokegaspgasp!). The public loooooves watching celebs do illegal things. Kate Moss is unapologetically successful, she's been in the business forever and knows how to play the game, she sets trends, she's hardcore, and by golly is she irreverent! 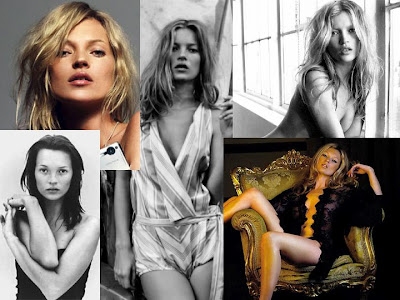 A few weeks back Moss was quoted as living by the motto: "Nothing tastes as good as skinny feels." Of course, the media was up in arms. Mothers were irate, repremanding her for corrupting their daughters' minds and encouraging eating disorders and unhealthy habits. Women's magazines chastised Moss for glorifying the idea of the Skinny Woman and encouraging women to diet, and the bloggers went crazy - how could a woman in such a glaring spotlight say such a horrifically damaging statement? Doesn't she know she's a role model??!!

In some ways I'm sympathetic to these arguments. Raising a well-balanced, critical and worldly child must be a daunting task to some folks, and I know that as a parent, you want your child to have positive role models. To my previous post "In Defense Of The Skinny Girl" one woman commented that she felt her influence as a parent couldn't possibly be strong enough to combat the pervasiveness of the mass media. Oy! I mean OY!! RIGHT?!

But let me get back to this quote: "Nothing tastes as good as skinny feels". It looks horrible at first glance. It promotes eating disorders and diets, it glamorizes skinny women, it tells us we cannot enjoy food and if we do we won't be happy. Or does it? Tell me how that quote is any different from these quotes:

- Tip of the Day: Consuming the right foods at the right time can help you feel good.
- Flat Belly Secrets: Abdominal authority Michele Olson, Ph.D., teaches you tricks to getting a tight tummy.
- Register now for our Jump Start Diet plan and you'll be entered to win a trip for two to St. Lucia!
- Log On & Stay Slim: Noting what you nosh and logging your daily workouts can help you keep off unwanted pounds.
- What Kind of Burger is Right for You? Depending on your figure, says the American Dietetic Association's Angela Ginn-Meadow, R.D., the ideal patty isn't necessarily the ever-virtuous veggie.
- Build Your Best Body Ever: Lose weight, fit into your skinny jeans, and more--all in 6 weeks.

Ok I'll stop there. All of these captions were lifted from reputable and widely circulated women's magazines that I can guarantee at least 90% of all Kate Moss objectors have bought in the last year (or at least looked at online/flipped through/etc). Now tell me, are they not saying the same thing as Kate Moss's controversial mantra? We, as women, are constantly looking for tips to improve ourselves - to be fitter, sexier, stronger, sleep better, know more, have better posture - because when we feel better about ourselves, we are happier beings. I strongly believe these magazine captions and Kate Moss's "Nothing tastes as good as skinny feels" to be one in the same.

Maybe I'm just sensitive to over-sensitivity, but it seems like the issue will never be left to rest. Maybe we should stop taking conversations about weight and food so personally and allow some kind of objective, rational conversation. In the meantime, lay off my girl Kate! She's just trying to look hot, make money and do the damn thang.
at 2:48 PM 1 comment:
Email ThisBlogThis!Share to TwitterShare to FacebookShare to Pinterest
Newer Posts Older Posts Home
Subscribe to: Posts (Atom)