Mommy...where does style come from?

I've been doing some thinking. It's nothing radical, actually it's just more of the usual - style...fashion...style vs. fashion...I love clothes...I want clothes...my credit card statements...the new pumps I just got for 50% off...the friend who encouraged me to buy them (oh hey girl, hey!)...my friends with style...my friends without style - you get the point, that's the Mihal train of thought.

So somehow this led to something a little bit more concrete - thinking about the people in my life and how they relate to my thoughts on style. If you do not yet understand the different between style and fashion, now would be a good time to refer to a previous Snaps and Daps post, called "Inbe-teen Fashion and Style". It essentially outlines fashion as understanding what’s vogue, what’s in, what’s current. It's a following-the-leader game that requires little skill and that anybody can partake in with the right means. Style, however, is a personal reflection; a personal rendering of fashion. It's creativity, the ability to make something your own - and even if somebody else is wearing the same coat, it looks different on you because you wear it in a way that only you can.

Now I'm about to make 2 statements that might be controversial:
#1: People are born with style. You either have it in your soul or you don't.
#2: Just because you don't have it yet, it doesn't mean you never will - because style can be in your soul but remain untapped...unexplored without the right inspiration.

I have have 3 examples to prove my point. Person number one is my sassy 13 year old cousin, person number two is my lovely boyfriend, and person number three is my unfortunately clothed friend who shall, for obvious reasons, remain nameless.

Let's begin with my little 13 year old cousin, a girl who proves my first point - she was born with style. Before I go on, allow me show you a few pictures so you can get a visual (in case you don't know me personally, little cousin's on the left, I'm on the right). 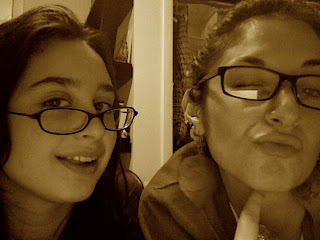 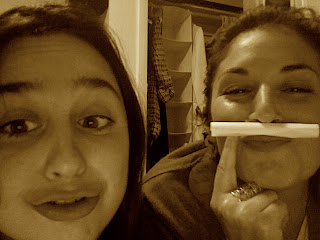 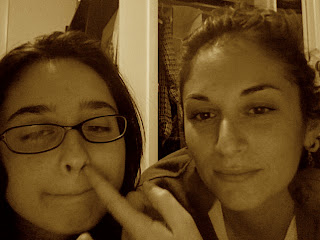 Even though, to my horror, this girl doesn't know who or what TLC is, if it were super important to me I could break out Crazy. Sexy. Cool. or YouTube the videos and sit her down and make her learn. This cannot be said of style, and lucky for her, she don't need no lessons (that's supposed to be said with the nuance of "I don't want no scrubs", but I don't think it translates in writing, womp). I visited with the family over Thanksgiving and over those few days I witnessed some great moments in style from this little chick. Turquoise jeans, cute little earflap hats, printed tops, and layers and layers and layers. We even flipped through my Vogue together, oogling some things and trash talking others while discussing the difference between fashion and style. The moment I knew this girl was on the right path was when her mom brought her a peacoat home from Old Navy. Black, waist length, cute enough but normal.

She eyed it up and down, tried it on, said "it's a little boxy but I guess it's ok"...then said, "but it's black, everybody has a black peacoat, don't they have it in like red?" Let me remind you that this girl is in middle school - a time when fitting in is crucial - and she's relishing in the unique. I'm very pleased with this comment...especially at the ripe age of 13, the perfect time to experiment with clothes and try new things. The style is in her and it has already started to take form. It is an innate force that will continue to grow and will continue to be inspired - you can't instill that in somebody and you can't take it a way. And she'll grow out of her Jonas Brothers obsession soon enough.

The second person I'd like to mention is my boyfriend, we'll call him J. He epitomizes the second point that I made previously, being that just because you don't have style now, doesn't mean you'll never have it. If it's hidden inside you, it will come out with the right inspiration and guidance. (Disclaimer: I'm not a total bitch, I got his permission to be one of my examples). Let me start this tale by stating that my boyfriend is really attractive - so attractive in fact that he could really wear anything and people probs wouldn't notice because they'd be captivated by his face. However, soon into the relationship I decided that just because he could wear anything doesn't mean he should wear just anything. I tried to Google pics resembling his mid-90's Ecko sweaters and oversized button up t-shirts with crazy prints, but since I couldn't find any I'll move on. The outfits were just...the way boys dress when they don't know there's more out there. Here are some examples (I don't know any of these people, I literally just Googled "guys" and these are the images that popped up): 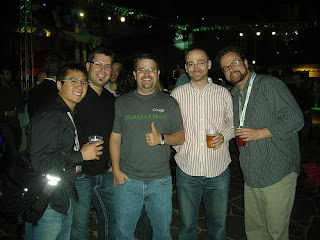 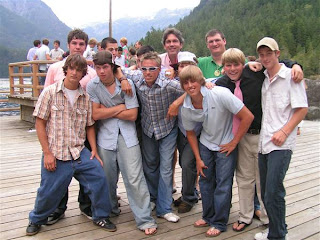 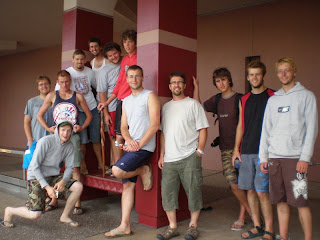 You know what I mean?? The transition began about a year ago when J bought his first couple pairs of kicks: 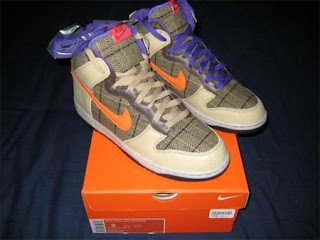 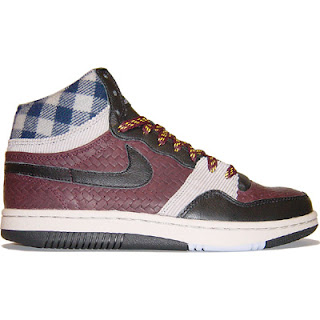 I was quite pleased because not only did I now have something nice to look at on his feet, but I was finally able to suggeeeest that when you wear kicks like that, you should prooooobably have skinny jeans to complete the look. He agreed and promptly bought some for himself at H&M. Hmmmm, not skinny enough, boo...so Dushane and I escorted him to Uniqlo for some super skinny show-them-legs off jeans. This was the beginning of the emergence of his style. It didn't happen quickly and he didn't do it alone, but after several group shopping trips and many clothing-oriented conversations, dear J was learning to shop and put outfits together. He came into his look and into his style that for so long had been hidden and underutilized. Skinny ties, cardigans, sweaters, layers...it's a beautiful thing. Yes, let me acknowledge here that it could have gone the other way...he could have just not gotten it. He could have bought what he was told and worn it all, but that wouldn't have made him the stylish, clothing-consuming thing he is today. Luckily for all of us, this boy dug deep and found the inner funk, the freshness and the flare to work his style - and to do it up himself. And it's only gonna get better, because all any of us can do is grow.

Well, all any of us with style can do is grow. Because for my friend, let's call her...Taquisha? Tammy? ...yeah let's do Tammy, no matter how much guidance she gets, her outifts will be forever wrong-looking. As an example, I'm going to use Britney Spears, because no matter how many designer duds this lady has, she can't seem to put a cohesive outfit together to save her life: 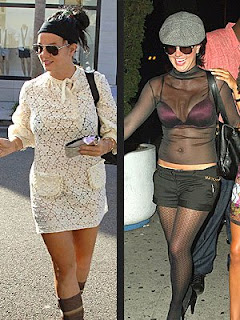 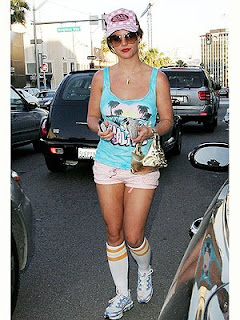 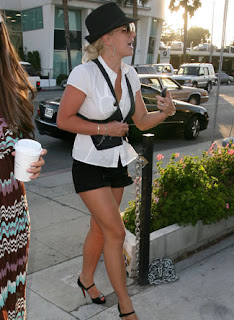 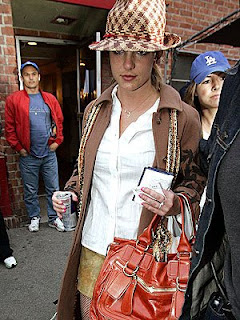 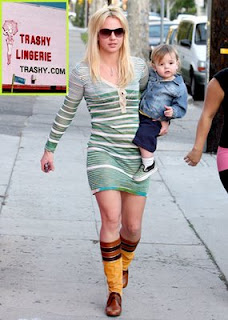 See, Tammy has a problem that most fashion-minded people have, which is that she can look at women on the street or mannequins, or she can flip through magazines to find out what's "in". But if one doesn't have the style filter in which she can process the "fashion", she will simply be left with garments. And when a style-less person is left with garments, she is left to put together outfits at her own discretion. Even though Tammy sometimes gets one or two of the outfit elements right, there is always something about it that is, well...off. The earrings, the pants being bootcut when they should be skinny, the shoes being flats when they should be stiletto - these are fashion calls that people with style can make on their own, it's called putting together a fly outfit. And sorry, you can have all the fashionable garments in the world, but if you don't know how to work them and make them all they can be, you might as well not spend your money on them in the first place.

Soooo there you have it. The cousin who was born with style, the boyfriend who found his inner style, and the friend who doesn't have it and never will. Harsh? Maybe. True? Yup. If you think you might be one of these people sans style and wanna know if it's there deep down or not, I say move away from the magazines and stick with the buddy system - ask your friends with style for help...because believe me, there's nothing more gratifying than bringing somebody's inner style to the surface (yes I'm implying that I have it, sue me). If you don't have friends with style, you're probably screwed...so gohead with those boot cut jeans, asymmetrical shirt and glittery shoes, and good luck to you and yours.


'prece.
at 6:23 PM
Email ThisBlogThis!Share to TwitterShare to FacebookShare to Pinterest

You've either got it or you don't.

I should have read this first before posting my comment on your latest post. this is very good. truly enlightening. i'm gonna go digging now, see if something emerges before my time's up.

Thanks JD, glad you enjoyed...best of luck on the dig! :)