was Daria just an animated My So-Called Life?

Warning: This post is totally 90's teen referential...totally 90's teen contextual...if you weren't watching Daria or My So-Called Life you won't get it. So feel free to admit that to yourself and stop reading now.

For the restayous...here's the question: Was Daria just an animated version of My So-Called life??!! Observe the little collage I put together: 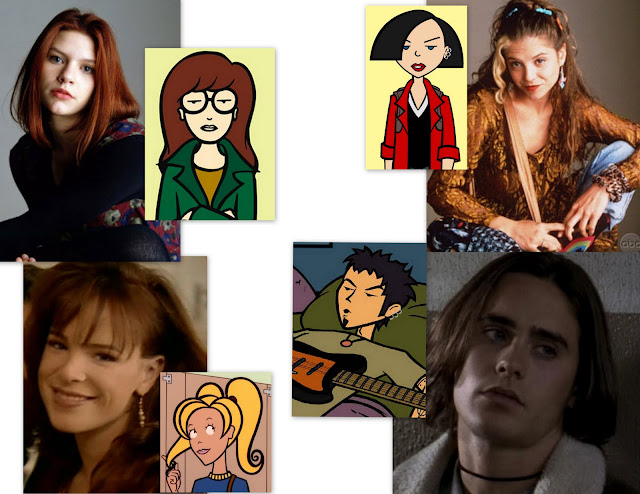 Allow me to break it down:
Angela//Daria:
Angsty misfits with a soft side. They don't care about the high school mainstream, but still sometimes find themselves secretly peaking at it from over the fence. Their moms both say dorky things to them like "a penny for your thoughts?", both have lame ass sisters, and both wear skirts with boots.
Rayanne//Jane:
Weirdos...if Angela/Daria don't care about the high school mainstream, Rayanne/Jane loathe it. (It's worth mentioning here that Jane is also kind of Ricky, because she paints). They both wear lots of earrings, are loyal to a fault, and their moms are both major hippies.
Sharon//Brittney:
All-American, jock-dating, everything that Angela/Daria are not. You think they're kind of air-headdy and shallow except for random times when they say something real and you're like omgyeah!
Jordan//Trent:
Hot. Suck at playing guitar but when they do it's hot anyway. Lean on things, lay on things, unattainable but continue to string us along...I mean them...Angela/Daria.
(Angela voiceover voice): So I mean, ok, like - obviously they're not exactly the same. But like really...when you sit back and compaaare them, it's like...wow. It's like, sometiiimes, if you pay attention to something, like...in a new way, you'll start to get like...a brand new take on it that you never even knew existed.
at 9:23 AM
Email ThisBlogThis!Share to TwitterShare to FacebookShare to Pinterest

This post is like, so insightful. Because when you really stop to think about it, I mean really pay attention to what's going on around you, they are like really similar. But, I mean, isn't this what high school was like in the 90s? I mean, for everyone?

It's not like I love Jordan Catalono or anything. Or Trent. But when they do that thing, where they lean on their cars and get real quiet...it's just like...wow.

I beyond love this. And FYI, I played Jane Lane when my drama class in high school wrote a play based on Daria. Yup, our class was THAT cool. (My hair was exactly like Jane's in high school.)

stumbled upon this randomly, so sorry that i'm a month late... but i LOVE this! spot on and hilarious!