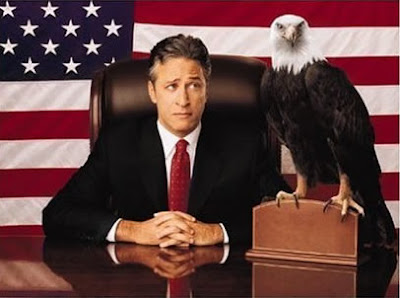 It's probably safe to say that my dad has given up on the idea of me marrying a Jewish man. Surely it's every Jewish father's dream that his Jewish daughter find a nice Jewish lawyer, doctor (etc. etc.) to love her and nurture her and help her raise their children to be decent Jewish offspring...but my dad has a good head on his shoulders and knows there are more important, more relevant things.

Well daddy, this might be your lucky day, for your Jewish daughter has found herself a great Jewish man, to love and to cherish as long as we both shall live. Well, right now he's actually married to a Catholic woman, but psh...I feel as though that can all be worked out. 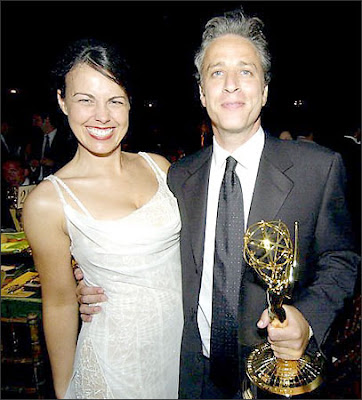 Yesterday MJ and I were audience members at the Daily Show with Jon Stewart. After standing on line for 2 hours in the FREEZING COLD, we were ushered in, through the metal detectors, and into the studio. (No pictures allowed sadly - they were actually confiscating people's cell phones). Once we were in the studio we waited about an hour for the hype man to come out - luckily there was an entertaining high school student with a lisp who was sitting next to us. He interjected random giggles and questions into our conversation, but mostly played intently with a rubrics cube. 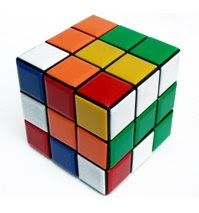 I'm not going to go into the details of the show. You know Jon Stewart and how freakin hilarious he is. Here's a clip from the show:
The Daily Show With Jon StewartM - Th 11p / 10c
81st Academy Awards
Daily Show Full Episodes
Important Things With Demetri Martin
Funny Political News
Joke of the Day


Oh...he's already married, you say? Well at least my head's in the right place, right daddy? No? Dammit. Honey, if you ever change your mind, I've got the perfect glass to stomp on with your name on it.


'prece.
at 10:56 AM
Email ThisBlogThis!Share to TwitterShare to FacebookShare to Pinterest