A miracle happened on 238th street (yes, the numbers got that high) last night- I sat down to watch television! Bravo! That’s not the salutations I get for my victory, but the channel I landed on, looking to fill my headspace with some design dopeness. I caught the tail end of Project Runway’s season finale, where the rack of judges critiqued the work of nervous looking women on the stage. As Tim and the crew dished, a sin happened on 238th street- I disagreed, disregarded and hated on what the fashion foursome had to say (are there four of them?)! Bravo? What they were saying about each designer’s work sounded legit- silhouettes, cuts, range, briskets…whoops, sorry, I’m hungry. But at the rate they were spewing extraneous terms, I wouldn’t be surprised one of them slipped in some totally unrelated term. To one of the finalists, whos work rang similar to Bellenciaga and some other multisyllabic designers, they suggest that she take a fashion history course (those exist?) as to not repeat pre-had creativity. This is where I had to called the BS like I heard it. At the end of the that sentence, with unknowing elitism, whateverhisnameis might have ruined and delegitimized Project Runway for me…and now I’m going to do it for you.

Really, fashion cannot be rated, in such a numerical, marginalized format. I’ve never taken a fashion history class, never taken a course in textile production, I’ve never even learn to sew! But I can still clean up, can still talk about fashion and its ills and perils, allwith technical ignorance. You don’t need it!! The foundations of any fashion culture was threaded together by women and men who created on assumption, hope and faith in their imaginations. Obviously there are greater cultural basics that have provide a guiding light- and even those are changing- like dudes wear shirts and pants and shorties rock skirts and heels; but developments from then on were based on intuitive innovation. “Intuitive innovation”- that just slipped out, but it sounds bookish enough to be “terminology”- def: creative development inspired by ones own creative, cognitive development.

So really, whathisname is has no right to "judge" any of the finalists:

1. his outfit was whack

2. his academic know-how won’t get him placed on racks, it doesn’t affect his savvy in real time, in real life.

3. The same borders the finalists were expected to know and follow are the same kind of barricades that hinder the industry. I should be mad at Tim-and-dem, they’re the reason GQ Magazine is whack, tossing us the same fashion, same advice, same general sartorial shamanism every freakin’ month!!

And another thing- Tim always wears the same thing! 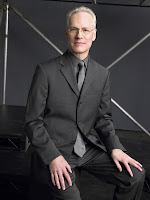 This isn’t to say that expertise doesn’t exist. Genius designers and stylists are still the truth, but the truth of the matter is their smarts come from understanding their own creativity (in the context of the larger culture) not so much in how many vintage Vogue mags they’ve read.

And for the record, I like the black girl’s show the best.

at 10:23 PM
Email ThisBlogThis!Share to TwitterShare to FacebookShare to Pinterest