It's 2008! The new year, a time for new convictions, trends, ideas and dope things all around. The list of illness below are my favorite things that I'm predicting are fittin' to blow in the coming months. Dig it:
W I L L J O H N S O N// G O R D O N V O I D W E L L

This dude is what a bohemian/hipster/musician/genius/madman was meant to be, someone more concerned about art and creativity than skinny pants trends, drug sprees and the discovery of the next "new". To the contrary, much of Will's widely ranging style is post modern at its core, using the old (sounds, themes, artists, etc.) to create the future. When he's not scribing for popular culture mags, like Remix and Antenna, or playing gigs with his contemporaries like Guillermo E Brown, he's experimenting with new styles and old schools to compose the most soulful, intelligent hip-hop instrumentals since who-knows-when. Just imagine if Curtis Mayfield or Stevie Wonder called Brooklyn home and made beats...this is what it would sound like. 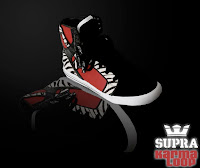 I wouldn't say that they will eclipse the popularity of the almighty Dunks, but Supra Skytops will definitely earn as much, if not more, street cred from sneaker heads out there than the usual sample of flyness on the racks. The famed gold pair that Jay-Z rocked was followed by a few dope colorways that proved absolutely fruitful. In '08, look out for these heart throbs and get the hat to match (but don't, really- it was just a good tag line).

To the untrained/scenester fashionista, what I'm about to say is going to sound like heresy. This year, (super)matching is out and coordinating is in. Well, matching isn't out, OUT, it's just it's just a more diluted, better planned batch than last year. With the explosion of photoshop streetwear brands and the color-crazy sneaker industry, 2007 proved an easy year to find a pair of kicks, a t-shirt and hat that all had the same 9 colors. But that kind of grade school color matching is out for 08, the good look for the year involves a better understanding of color. Find colors that are related or in the same family, break up your colors vertically (hat- shirt-pants-shoes), use subtle accents to "match"- these kinds of techniques are gonna rock the next 12 months, as they should. So dust off that credit card and go cop those new threads (and NOT the hat to match!). 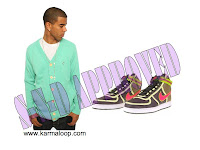 No more Chicken Noodle Soup, no more Toe Wop or Superman, the world is all cranked out and ready for a rest. Last year's dances were like watching your little cousin frantically run around your house for hours- completely hyper active and exhausting. This year, it's like your little cousin has gone home and you can put on your own music- which, if you're on it, will consist of players like Chromeo, Jupiter Rising and Calvin Harris- music made perfect for doing the honorable, ready-to-blow (again), two-step (no, not UNK). This dance basic has been in the shadows and in the background for way too long. Although it never actually went anywhere, it has barely been looked at as actively dancing, mostly because it has been overcast by frantic trends like the superman and the lean-with-it-rock-with-it. But remember, the two-step is one of the most swaggerific dances out there! It's simplicity makes for an artist dose of interpretation and can lead to some seriously dangerous grooves. It's the primary dance of Motown, the choice for the seventies and probably the impetus for your moms and pops getting busy. Embrace the movement.

This is a promise: we will get a feature with this dude! If you're tuned in, you know the hip-hop game isn't the same, rappers are made with catchy dances, producers are made by way of ringtones and none of them are actually "real". When I say they're not "real", I'm talking abou the validation of their skills as an artist and/or performer - you don't really get to see them at their usual concerts, the way it used to be when hip-hop was a less convoluted art form. At one point, it was possible to hear Slick Rick on the radio AND see him rocking a concert during the same week. These days, people actually credit T-Pain's voice enough to see buy tickets in case of a show. Not only have lyrics and wit been traded in for cliche gun talk and bullshit romance rap, the art of performance has been all but lost. As Theophilus' title track asserts, hip-hop needs a hero...and he just might be that.

Having seen this dude perform, I can stand behind every minute of his act- this is what a performance should be like. London delivers his words with a rare form of energy and theatrics that leave crowds in his wake fiending for more. On the indie trail, London is about to be the hottest thing since payday. I can just see you hitting up Myspace now- let me help: