Recently my homegirl Sabel told me that I should feature Bianca Jagger on the bloggo because of our shared affection for menswear. Last night a fabulously gaudy old lady in the health food store asked me - with mouth agape and a super exaggerated exhale - if anybody has ever told me I look like Bianca Jagger. Pause... 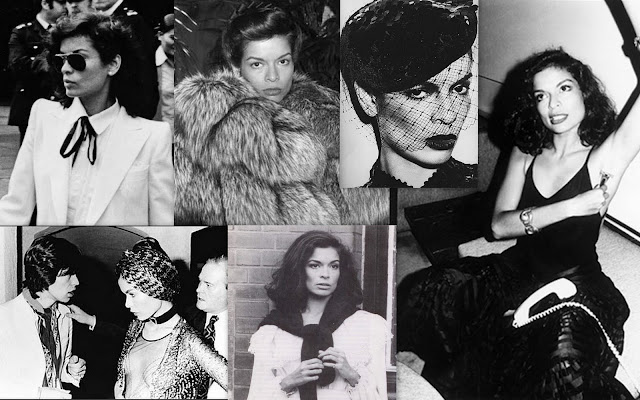 Maybe it was that I was wearing a collared blouse buttoned all the way up...maybe it's our eyebrows, we do have very similar arches. Whatever it was, it's the best comparison I've ever gotten - definitely beats Jennifer Grey from Dirty Dancing. Pause again.

Back to Bianca: not only has she been uber political in various human rights movements, but yes, she was married to rock legend Mick Jagger. And her style??!! Her styyyyle. In her heyday she incorporated the best of menswear and also mixed it up with super bohemian flowy, furry, sequiny stuff. I'm so into it. So so very into it.
at 10:07 AM
Email ThisBlogThis!Share to TwitterShare to FacebookShare to Pinterest