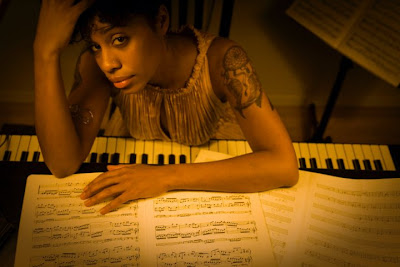 She's a writer, she's a producer, a singer, and a keyboardist. She's a freak, she's a lover, she's a sinner - she plays dress up, rides roller coasters in the woods, and travels at the speed of night. Tecla Esposito is a contradiction of herself. While all at once being completely New York, she is entirely other worldly. Her husky, angsty voice takes us on tours of rainbows and love - and her provocative and socially conscious themes gently hold the hand of her upbeat tempos and psychedelic electric sounds. Tecla recently released her first solo project - Strangers in Masks - and like other savvy musicians, is jumping on the free download bandwagon - generously allowing her gift to land in the laps of current and future fans...all in the name of art. The album has been on constant rotation for weeks - so I thought it proper that I not only share the love with you musically, but personally introduce you to this luminous siren as well. And what better way to do both than via my "When Style Meets Music" interview series. Lord knows this girl's got the style front covered as well. So while you read, please do yourself a favor and take the time to download Strangers in Masks simultaneously...HERE.

Mihal Freinquel: Who is Tecla? Where’d you come from? What/who are you comprised of? As a human, as a musician?
Tecla Esposito: I’d like to think that I come from a long line of past lives comprised of Moroccan alchemist, Arawak/Taino shaman, Baroque composer, Yoruba mother of 12, dancehall queen, renaissance Jezebel, British schoolboy, and rare breed of deep-oceanic jellyfish. My old soul as well as my musical identity has definitely tapped into all of these characters at different times.

MF: How would you describe your musical style on this album, Strangers in Masks? If you had to, what genre would you categorize your music as?
TE: I personally hate categorizing music into one particular genre (although I do understand people’s incessant desire to try and place something new into a familiar context in order to understand it). In elementary school I was that weird piano kid who loved Chopin, Mendelssohn, Gershwin, and Beethoven. I was raised in a very un-American household listening to Haitian kompas and vodoun music when my mom was home, and straight up Italian opera when my dad was. I was an 80’s baby and 90’s teen surrounded by everything from hip-hop, IDM and R&B, to metal grunge alternative rock and electronic music. So put all that together and you get a genre of “Electronic-Alternative-Melodic-Afro-Classical-Post-Hip-Hop-Post-Doo-Wop-Post-Punk-Tropical-Pop”. But to alleviate the uber-hyphonation I decided to call it “Tropical Electronic Pop”.

MF: I like it!! How would you describe your style, as in the way you dress?
TE: Hmmmm…well I’m not really a “fashionista” and don’t really think of my style as being of one particular vain (much like my musical genre), but I am very much into vintage signature pieces and very into androgyny. I find gender ambiguity sexy, and have always been attracted to “boyish” clothes on girls and “girly” clothes on boys. I feel most comfortable in shorts, vests, loose tanks, suspenders, etc., and I’d say 50% of the time I shop in the men’s section, especially in the shoe department (which I can unfortunately never find my size in).

MF: How does your style aesthetic fit into your musical aesthetic (if at all)?
TE: Similar to my fashion style, with my music I like a mélange of different tones and sounds. Although I sometimes dress in men’s clothing and have lots of tattoos in places most people would consider “masculine”, you will definitely catch me in a summer dress and a feminine floral print on any given day. I like the “mismatching matching” look, which is basically mixing different prints and colors (hopefully in an un-tacky way) that you might not think could go together. In my music I talk about issues that are considered socially conscious and serious, however juxtaposed with up-beat lighthearted sound choices and production style, so even the average person who is just listening to dance can vibe with it in some way.

MF: Where do you shop?
TE: I’m a thrift store junky. My favorite is Red White and Blue. Beacon’s Closet is cool, I love neighborhood flea markets, and The Salvation Army of course. Every time I go to a new city I hit up the thrift stores, so far Seattle and Atlanta win in the U.S. and Berlin and Paris win in Europe. I’m not really into department stores, and since a DIY musician such as myself is not rolling in excess shopping money, I have definitely developed a serious eye for amazing thrift pieces for under $10. 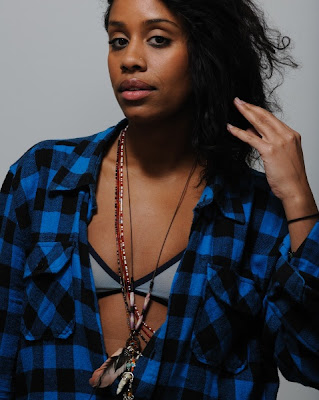 MF: Sigh, I love a good onesie! You just played SXSW in Austin. What was your intention when heading on stage?
TE: At first the idea of performing in Texas as a brown person making unconventional music was kind of scary because for some reason I’m unnecessarily scared of the South - and because a lot of the music my band-mates and I make is very personal to where and how we grew up (i.e. ‘mixies in fancy schools’, ‘ivy league circuses’, ‘lumberjack shirts and leather boots in Williamsburg’, etc). So my intention on stage was (and still is) just not to scare people away. But of course we were welcomed with open arms and the general message and energy of the music definitely transcends NYC.

MF: If you could flip your style up completely, what would your alter ego wear?
TE: Probably fancy cocktail dresses and heels for days! 5-inch heels! 10-inch heels! All the ladies in their heels are just so dreamy, but alas, I can’t even take one step in heels (literally). Never have been able to. I’m a flats chick but I make it work.

MF: On my iPod when I go to play TECLA you’re right in between Talking Heads and Tina Turner. For some reason I feel this is really relevant. Maybe I’m projecting. Is it relevant? Back me up here.
TE: Ha! That’s pretty amazing. Talking heads were one of the more experimental genre-mixing mainstream NYC bands of their time, and Tina Turner was a performance master and pop queen - all things I ultimately would love to achieve for myself in the music industry. I get very irked at the connotation that “pop” automatically means “bad” because of the direction that mainstream music has gone in the past decade. Music that is “pop” aka “popular” aka “mainstream” aka “well known by the masses” can be GOOD music too! Apparently I missed the memo that said you have to be a somber-garage-underground-backpacker artist in order to be credible? From the 50’s to the 80’s mainstream music was catchy, meaningful, danceable, and broke boundaries, which is what the world needs to get back to presently…aka lets go back to somewhere between Talking Heads and Tina Turner (and apparently I love to use an “aka”). 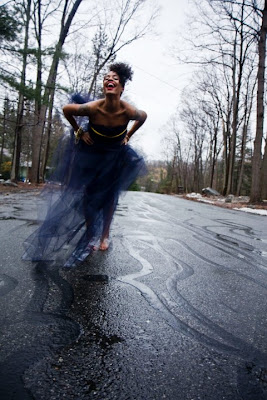 MF: Well I just linked it, so they don't have to! Anyway, you did EVERYTHING on this album. Tell me what went into it- highlights from beginning to end.
TE: OMG, what went into it? A whole lot of sleeplessness, starvation, and blocking out the rest of the world. I started this album in Berlin with a new laptop and no intention of releasing anything 5 months later. I had been in band after band before that moment and never had the chance to just take a minute to think about who Tecla is without any collaboration. I ended up writing and recording 1 or 2 songs a day and thought why not just make a whole album? A lot of people told me it was impossible for me to finish in the time frame I had given myself, which automatically made me go ‘oh really? I can’t finish this 16-song album and release it myself by April? Well in that case IMA JUST DO IT TO SPITE YOU’.

MF: You’re interviewing a musician. What’s the first question you ask him/her? Who would you want to interview most?
TE: I’d ask them what they think about right before they fall asleep. It’s one of the most intimate moments of the mind, as well as being the time of true musicians’ greatest revelations. But anyone I would want to interview I’d have to resurrect first.

MF: Oooo, I'm gonna steal that question for my next one. Final words?
TE: As a woman encircled every day by the sausage-fest that is this male dominated music industry (don’t get me wrong I love sausages and I love my male musical collaborators) I often feel like I have to work twice as hard in order to gain the same respect from the surrounding male audience. One time at a show a guy asked me if I was “fake playing” the 2 synths on which I had just busted my ass off on stage. Before drop-kicking him into a choke hold I had recently perfected in kickboxing training (oh yeah I’m also training to be an ultimate fighter) I decided to take it as a sign to just keep blowing peoples minds and eventually they’ll get it. Female musicians tend to be viewed by men quite one-dimensionally - but at the end of the day “the cute girl with the good voice” or “the girl who plays the piano” is just not good enough for me - because as threatening as it may seem we are much MUCH more and deserve to be taken as seriously as the next guy.

Well by now you've no doubt fallen in love with her as much as I have. Now that your mental and visual goodies are all stirred up, don't forget to give those ears a run for their money too. Download Tecla's album Strangers in Masks HERE. Check out her MYSPACE while you're at it.

at 6:47 PM
Email ThisBlogThis!Share to TwitterShare to FacebookShare to Pinterest