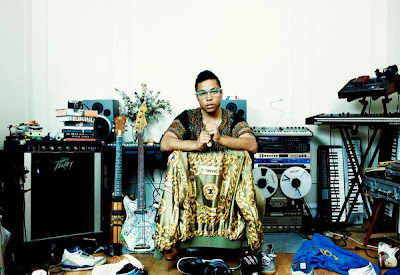 Last week in my When Style Meets Music installment, I turned to Aja Volkman - frontwoman of LA rock band Nico Vega. This week I put my thang down, flipped it and reversed it - and crashed into musician, writer and producer, Will Johnson (aka Gordon Voidwell, his stage name/alter ego).

For those of you who aren't familiar with Will Johnson/Gordon Voidwell (well firstly I shed a majorly salty tear for you), I'm going to try to encapsulate this dude in 3 words. Ready? Here goes:
Irreverent.
Dazzling.
Inventive.
For those of you who are familiar with Johnson, you know that no amount of words on a page will do this fellow justice and I just did myself a huge disservice as a writer. *Sigh* aaaah well...

He crosses the line, he tells cool what's cool, he's constantly contradicting himself in a way that always makes sense. His sound is new and old...and nothing you've ever heard...and everything you've heard before all put together.

I bring you: Gordon Voidwell.

Mihal Freinquel: Who is GordonVoidwell? What’s the meaning behind the name? Why not perform as Will Johnson?
Will Johnson: Gordon Voidwell is a character in development. Ultimately, there is no single truth behind this character; Voidwell is constantly in flux. Furthermore, he's a character whose sole aim is to remain in flux. Gordon Voidwell represents the death of the metanarrative and the possibility for multiplicity within a single identity. As such, Voidwell is meant to encompass all things in this scatter-brained, schizophrenic and post modern world we live in...

As a stage name, Voidwell allows Will Johnson to communicate these ideas through above-mediocre dance music and good old-fashioned performance antics. The name Voidwell is meant to signify the immense emptiness that exists in life. Simultaneously, it's meant to suggest the immense potential for deriving fulfillment through the embrace of this emptiness. That being said, I don’t who I am!!! Next question…

MF: This is a really obnoxious question but I have to get it out of the way since you have such a unique sound and style: how would you categorize your musical genre? Who/what are your musical influences?
WJ: I’ve been calling my music experimental pop. That's to say, it's experimenting with the subject matter/lyrical content of pop music, while adhering to the song forms and in some cases, instrumentation of pop music, proper. Experimental pop implies my music can not only speak to imbeciles, but also well-educated and artistically-inclined imbeciles. No, that's a lie - if you like my music, by default, you're not an imbecile. But once you get to saying imbecile it's pretty hard to stop. It's also fun to spell imbecile...

I'm heavily influenced by the French thinkers, the Israeli military, the Somalian pirates, the Chinese factory workers and the American flag (these are all post-punk, Dutch-African synth pop bands that James Murphy fails to mention on "Losing My Edge").

MF: Remember in the 90’s when Tyrese did a Coke commercial and sang in the back of a bus? Or when Common dedicated his life (and his whole Electric Circus tour) to promoting Dr. Pepper? Which brands (any type of brand) would you pimp yourself out to?
WJ: Firstly, remember when Common did a commercial for "Coke" where he said "the real can't be bought, but sold"?? That was one of the most ironic/iconic moments of television advertising. Anyway, if I were in Common's position, I would've pimped myself to Top Ramen!!!! Most of my starving artist/musicians friends wouldn't eat anything if not for Top Ramen...

Secondly though, imagine this: a black & white television commercial. A skinny, affluent couple is in a row boat in the middle of a calm lake. They are wearing expensive ass shit and making love in a way that only rich people do. It's heating up. There's mountains and shit in the background. Both the man and woman kinda look like dudes, but whatever...all of a sudden VRRROOOOOOM!!!! Gordon Voidwell comes through on a Sea-Doo, holding a keytar playing a filthy solo over Noreaga's "Super Thug." The commercial is for Funkmaster Flex driving shoes...

I'd consider that type of thing too. 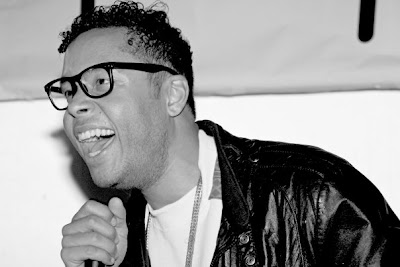 MF: HA. Making love in a way that only rich people do while wearing expensive shit? I dunno what that looks like but it sounds dynamic! Speaking of clothes, how would you describe your style/image?
WJ: Hybrid. In dressing as in making music, my mission is to mix and misplace signs and signifiers to make things that are at once unusual and familiar. As far as clothes, I guess these days I’m wearing 1950s-era jackets and scarfs with 1980s-era acid-washed jeans…with Doc Marten's. For the common eye, it looks like I’m either a) homeless b) insane c) have the worst sense of style ever. But, for the people that get it, they realllllly get it.

MF: I get it...and I loooove it. So where do you shop?
WJ: All thrift everything. All vintage everything…Ugh, more like Uniqlo and Urban Outfitters. Sad, sad day.

MF: Worst mainstream style trends of the last decade? Best?
WJ: Worst: Blackface. I can’t believe Vampire Weekend gets away with it. Best: Alienface. MGMT killed the alienface paint on their album cover, and they did it in a tasteful way.

MF: Okay I have no idea what just happened...Let's move on. What musicians/bands/genres are you into?
WJ: Lil Kim, The Slits, Le Tigre, La Roux, The Hellen Keller Trio, Nicki Minaj, Telepathe,…FEMALES > DOODS! I actively try to never listen to male artists, ever.

MF: How would you categorize your audience? Has it changed since the beginning? Can their style/aesthetic be categorized?
WJ: I’d categorize my audience as not big enough. Buh-duhm-ching! Actually, I’m surprised by how eclectic my audience is. I couldn’t really say there’s a specific “type” of person that comes to my shows, which is awesome. It’s sort of the rainbow coalition of audiences. Some hip, some not. Some skinny, some not. Some tall, some not. You get the picture…mostly hipsters, but also some genuine, good people that just love music, regardless of scening around...

Two types of people we could use more of at our shows include:
1) models in alien face paint
2) older gentlemen (in their 50s) with pencil thin mustaches, wearing capes.

MF: What’s your intention when you head on stage?
WJ: I have two, generally:
1) DO NOT FALL ASLEEP WHILE SINGING!!!!
2) Do not focus on that man’s pencil thin mustache and silk cape, for he is a vampire and he will bite if you make eye contact.

MF: If you could flip your style up completely, what would your alter ego wear?
WJ: That’s a trick question!!!!!!!!! 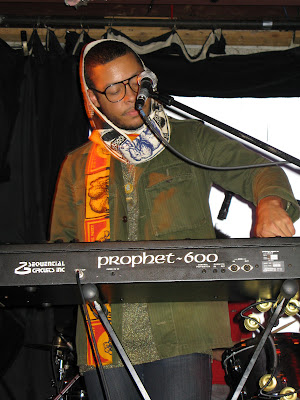 As far as trendsetters in the music world, uhmmmm…where do I begin? There are too many people doing incredible shit to try to put them on a list.

MF: What are your staple articles of clothing?
WJ: Fancy shoes that look expensive, but cost very little and plain looking jeans. The dawn of overly ornate clothing in the everyday realm is finit!

MF: Most relevant lyrics to this interview:
WJ: “What? Y’all thought you wasn’t gonna see me????? I’m the Osiris of this shit!" Uhm, No ODB – we were sure we were going to see you, chill out.

'prece.
at 4:04 PM
Email ThisBlogThis!Share to TwitterShare to FacebookShare to Pinterest